Examples of how to cut out wood

How to make a board from raw logs is one of the most difficult things for craftspersons. It is called a "cut of wood".

Shiho-Koguchi is a cut to make all 4 sides ends, and also called "amulet board", and said to be auspicious, but from a practical point of view, the corners are fragile, and the grain is slanted and unnatural. Now there are few people who make it. 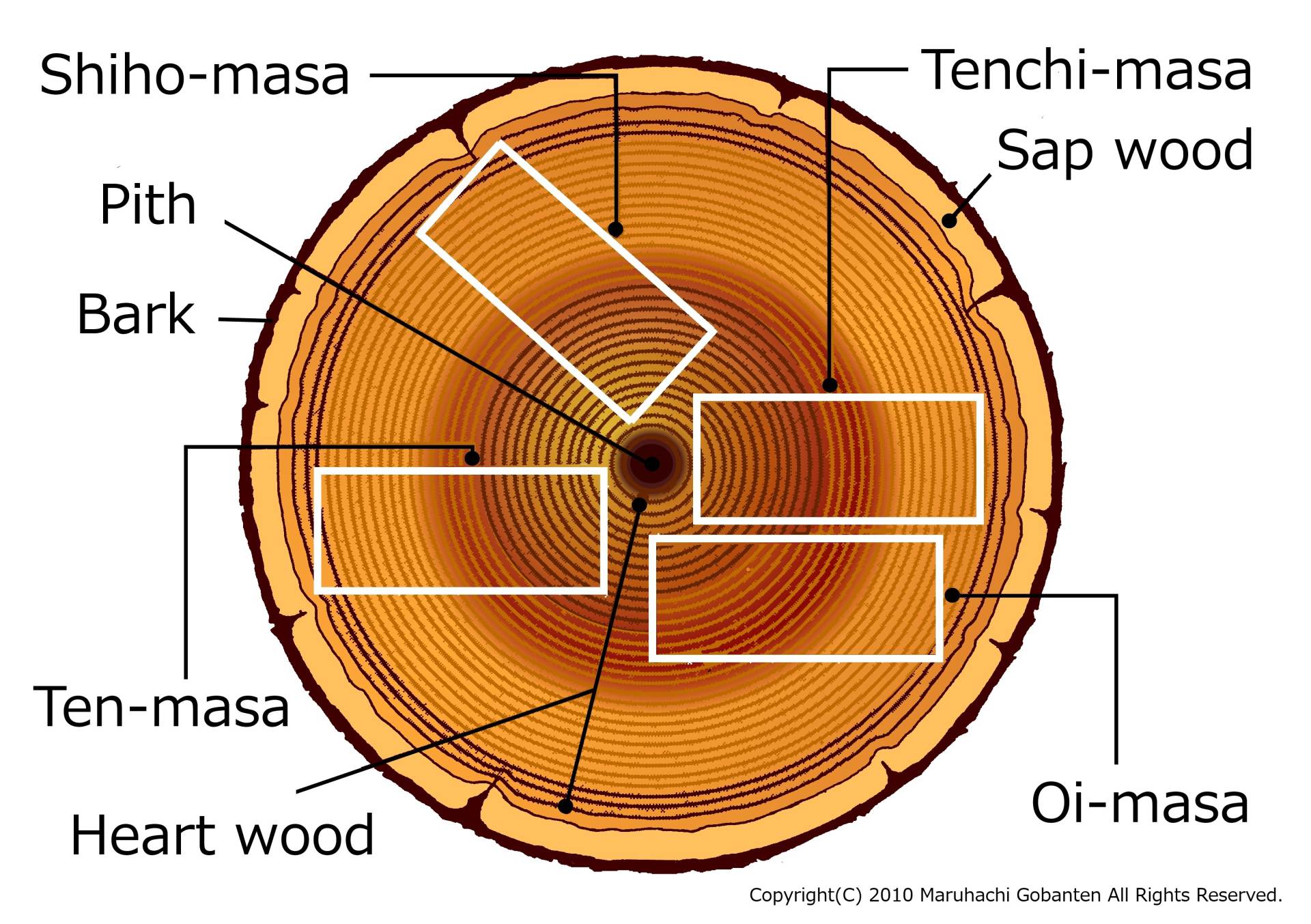 Since it means "the grain of wood coming out of the heavens goes to the ground", when you look at sides facing players of the board, the grain on the surface runs directly below, which is true Tenchi-masa. Drawing a line from the center point of the pith, it passes through the center of the ends. In theory, Tenchi-masa has no top or bottom of wood, so we make the more beautiful side the face. Therefore, it is characteristic of Tenchi-masa that both its edges are completely cross grained.

The line drawn from the pith immediately falls into the top surface. The characteristic of Ten-masa is that the wood grain is almost 90 degrees to the face of the board, so the face's grain stands out neatly, giving it sharp beauty. The top and bottom are completely different, but it is the best cut that emphasizes the beauty of the face.

The top, bottom, left and right sides are all straight grained. Although it's almost the same as Ten-masa, it's difficult to get perfect straight grain unless it's from large wood. In that sense as well, the perfect Shiho-masa is prized, but in reality, in most cases, Oi-masa is mistaken for Shiho-masa. 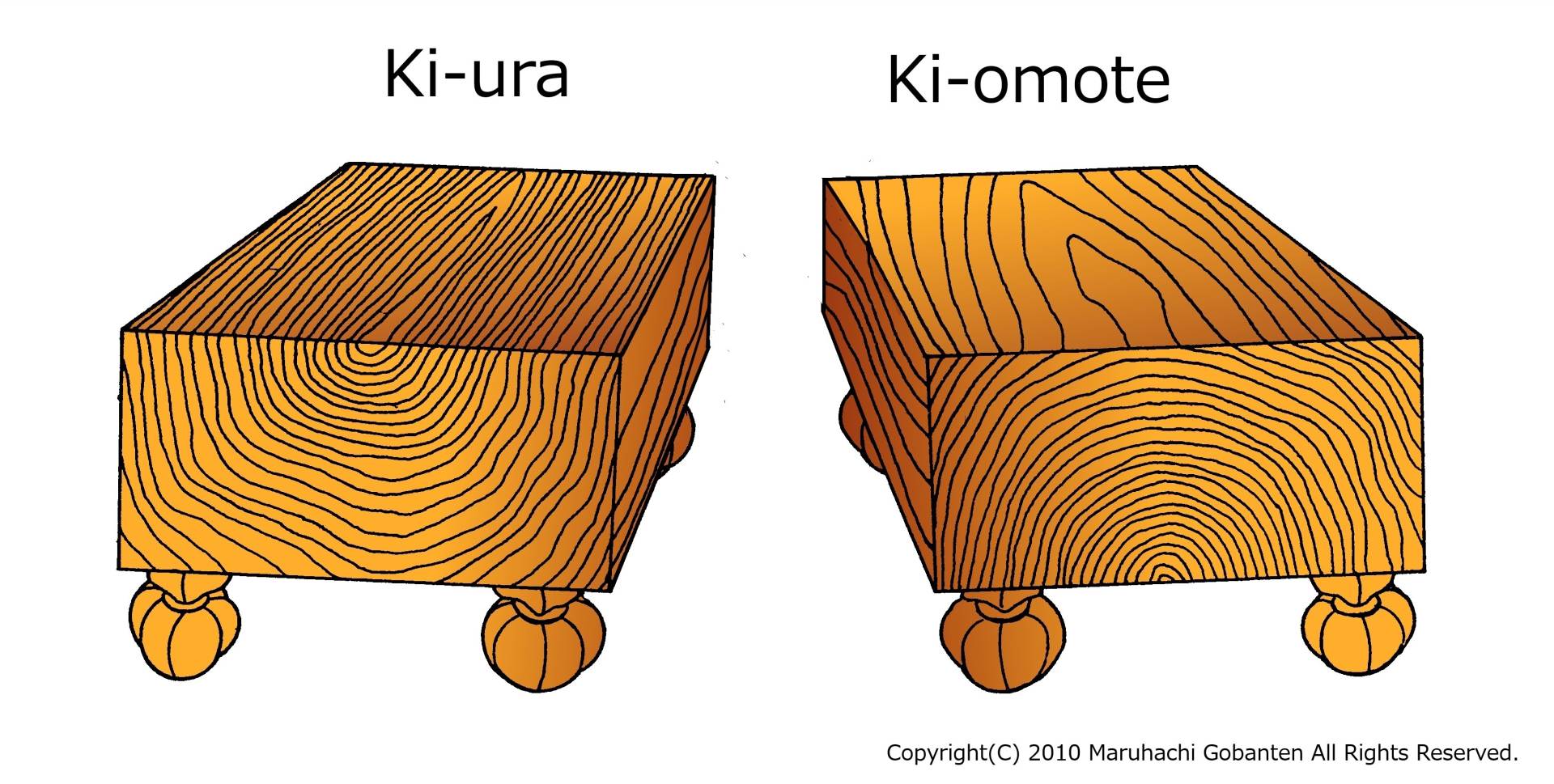 The side closer to the pith of wood is called Ki-ura, and the bark's side is called Ki-omote. Even if the same cross grained board, the name and value of boards are different depending on whether Ki-ura or Ki-omote appears on the face. Even with the same Ki-ura, if the position of grain ("cathedral" pattern) is in the center of the board, it is also called a "well-behaved board" and is particularly highly evaluated because of its symmetrical beauty.

The bark's side is the face of the board. As shown in the figure above, it has the drawback that the face has rough cross grain, and it is said to be a "single-sided board", and considered that the rank is lower than a Ki-ura board. It is a cut when the pith's side has defects such cracks and stains. 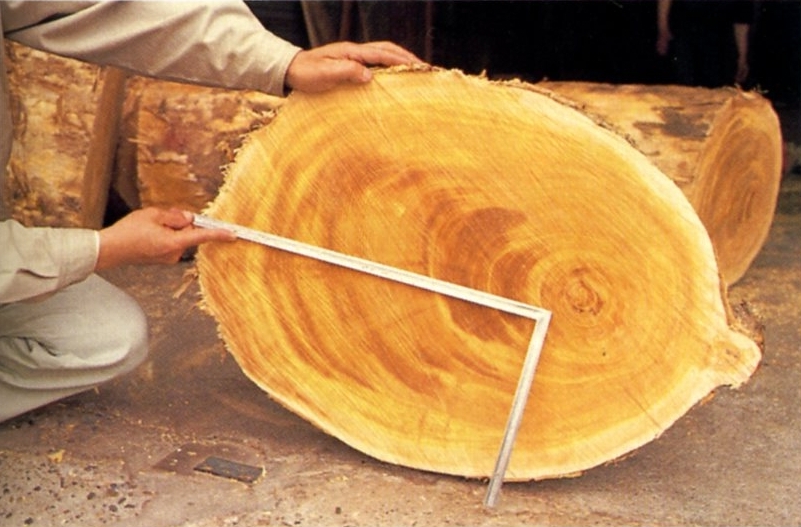